The SEC has one highly rated academic school and it rarely fields competitive teams and averages just over 22,000 fans per home game. They don't belong there, but will continue to stay as long as they are not thrown out because of the revenue stream it brings in. You can get an education in the other schools, but you do not have to in order to play football. But the Big10 has great academics and great teams and a great contract that guarantees tons of money for each school. BC stopped improving as soon as it got into the ACC and has been reaping the benefits for all those years without giving back. So many. e.g. Jane, Penny, Micron, 74, etc. have discussed this on this board -- so I do not have to reiterate nor could I be as eloquent. I have said this before and will continue to say it until I am banned or God comes and gets me: A UNIVERSITY IS LIKE A PIECE OF FRUIT -- IT IS EITHER GROWING OR IT IS ROTTING -- IT NEVER STAYS THE SAME. When we entered the ACC, we resolved our financial issues -- we were ranked about 30th academically -- when Matt Ryan was here, we achieved top 10 rating -- Now, we are a 6-6 team instead of 10 win team -- our academic rating has slipped to 36 (20% drop -- Could you keep your job if your production dropped 20%?). We have been steadily rotting. Who is at fault? Always the folks in charge are at fault -- the President, his staff, and the Board of Trustees. It isn't the fault of Covid -- or the fault of the ACC -- or the fault of NIL and the Supreme Court -- AS IN EVERY ORGANIZATION, IT IS THE FAULT OF THOSE IN CHARGE. I will not give them a pass -- ever.
Last edited: Apr 30, 2022

Remember smug Leahy and Hairdo Clown Bates cast the only no vote for Player Stipends since Father thought a BC scholarship was enough?

I mean how about some cash to buy a pizza on a date?

Beyond belief tone deaf BC idiots!

So in a expensive tony, rich Newton neighborhood not giving middle class or even poor kids on scholarship cost of attendance spending cash was acceptable.

What an absolute arrogant condescending disgrace. I remember my posts were pure volcanic, (as always).

Like I have been saying ad nauseam for decades and as the most hated blogger at BC and the universe:

Lazy and cheap, thy name is Boston College.

Look at all the

The list of football schools that have blown by BC, well, too long to list, but when over the last 13 years you have 1 win vs. AP Top 25 and 33 losses, you can’t argue with that Record of Performance.

If BC shuns my NIL recruiting strategy or doesn’t pick a better model for the new brave College Football big business of paying top talent, then expect to keep losing to programs with alums with more pride and desire to win in their high revenue

Money talks, and no kid is gonna turn down a nice NIL cash deal for a BC diploma unless he is rich and might not even then.

After todays story, the NIL is about to go $$$ ballistic and as usual I should use this as my new signature…. 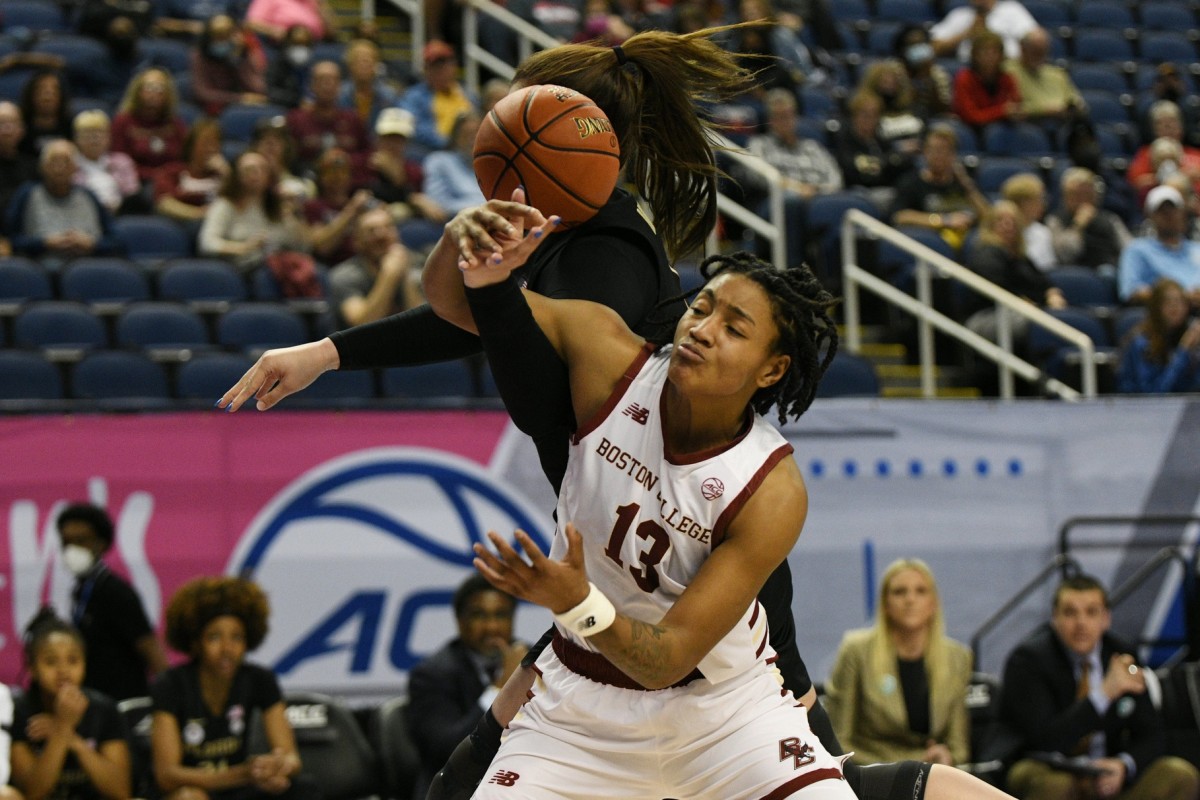 The former Eagles star will be heading to Virginia Tech

I think the argument that most of these girls are transferring because the coaches want to give the younger girls a chance does not hold much water. Something other than that is motivating all these girls to leave the program.

Staff member
I cant speak for everyone but it's a simple math equation for most of this.

BC has 7 returning scholarship players, plus 4 true freshmen, for 13 spots.

I truly think a lot of this is because of the extra COVID year, it has thrown a monkey wrench in roster management for every program.

Another no NCAA Tournament appearances in 17 years loser program that just lost 6 players or mostly the entire starter team to TP.

No matter, a team that draws a hundred friends and family a game in attendance for decades.

Add in the 16 years the pathetic Men’s program will not have won an NCAA tournament game and anyone can see we really don’t need an Athletic Director.

We need Mantown Leadership and my NIL Recruiting and TP strategic plan or way better.

Texas & Texas A&M are showing the way. USC went after Pitt WR. Players are demanding big $ or they threaten to leave.

BC will do what BC has always done in last few decades and since I was there.

If you think for a second this AD hire matters, just remember BC might not want to participate after the Zay deal was trumpeted as the BC diploma was worth more in the long run.

Maybe so in this case, since we have a general range of what was Zay was offered, but in the future in mostly all cases, make no mistake,

no or a weak NIL participation is a fatally flawed decision

for BC’s 3 big revenue generating programs if no NIL strategy, huge cash and team is instantly formed and deployed for instant impacts with recruiting talent.

Going forward, BC needs a savvy huge NIL cash flush recruiting Leader & team and the AD is just a figurehead “Dunsel” for compliance and whatever Admin duties.

The real hire is the High School & NIL “AngelAlums” Leader & team, and so far I haven’t seen what BC is doing so if anyone knows, do tell!

From past history, the chances of anyone from BC reading my robust detailed strategic plan suggestion and the posts I made about Texas yesterday and TA&M already, BC will most likely be a very passive participant, if at all.

I now believe this AD hire might be totally irrelevant to the glide path of BC Athletics with the new NCAA paradigm.

It may be a very unpopular and derisive post, but then again, I’ll stand on my track record of the past 20 years on all BC related topics, sports and all else.

But remember, BC is run an autonomous way -- and the leadership will be 75 years old next year. Usually, Jesuit colleges pick a much younger man who can handle the rigors of leading a major university for 15-20 years or so. Just because the current leadership has not agreed with your ideas, does not mean that the next one will also do so. We have seen other Jesuit colleges be very successful in basketball and many Catholic colleges being successful in many sports. ND was in a terrible position before its AD was hired, but the leadership at the top sought an AD who had that kind of experience and talent.

That is a major change -- BC has to decide -- Do we want to play under the new rules or do we want to de-emphasize. If it does not do this via its leadership, it will be forced out of Power Five status.

I expect BC's leadership to change its course-- I hope I am right and you are wrong, but I am not laying any money on my hopes.

BC sees the huge ACC $ Revenue and will always do what is required to stay in the ACC and the ACC likes the academic composite ranking BC brings and mostly easier wins for its better & peer teams.

I hope you are right, but I’ll stand by my opinion as you know from last 20 years, this new AD unless hired for NIL Leadership as I described above, is totally irrelevant and just a compliance officer and staff manager.

Hiring coaches now has even changed with all the alum opinions, huge $, consultants, affirmative action, diversity and outside influences.

My Tibet Retreat is calling!

AJBlack_BC said:
I cant speak for everyone but it's a simple math equation for most of this.

BC has 7 returning scholarship players, plus 4 true freshmen, for 13 spots.

I truly think a lot of this is because of the extra COVID year, it has thrown a monkey wrench in roster management for every program.
Click to expand...

There are 15 scholarships allowed on the women's side - so 4 open spots at this time. Your point is valid to a degree but you have to wonder that all of the seniors chose to leave and I believe that they are all playing next year somewhere else. It was announced today that Soule has surfaced at Va. Tech.

Not saying that there is a high degree of dysfunction within the program, but something definitely seems amiss at this point. It will probably never surface in a public way but I am guessing there is some backstory here.
T

A reliable and knowledgeable poster on the 24/7 site stated that in checking the BC athletics website the two male assistant coaches for women's bball are no longer with the program. Maybe a coincidence but maybe not. Adds further fuel to speculation that SOMETHING happened to cause unhappiness. It probably will not surface but possibly down the road something will leak.

It has been a truly wonderful thing since I was in college to see the Title 9 and women getting fairness and the absolute joy of playing all these sports that their predecessors were denied.

Women can only make big $ in tennis and golf and maybe the WNBA, but that is a NBA welfare sinkhole.

Women’s college sports 99% is a cash flow deficit and that is OK, but sadly when it comes to the new NIL or paying for HS recruits, or TP, all women’s sports are also 99% irrelevant.
Last edited: May 14, 2022
C

Maybe that might change as our women learn to use social media the way the point guard for UCONN has -- followers mean revenue and Charlotte should have many more than she has now -- PR firms abound -- Add that to your master plan -- but I love the way the SEC has discussed giving full scholarships to all female and lesser sports athletes with he extra revenue coming in from that lucrative new TV contract.

And I think BC has to get out in front of what makes a woman a woman -- I would hate to think we would all define someone completely on just their sexual orientation -- and won't even go into persons who are born men who compete in women's sports because of their sexual orientation. I think all of these ideas are actually against women who compete in college sports because it allows any compensation that could come to them to go to folks who have natural advantages because of a difference in size and strength.

I know folks have differences of opinion of these ideas, but I my argument is not based on the teachings of the Church (which are clear that men and women cannot change sexes), but rather in fairness to the woman athlete who may be on the precipice of finally getting some equality of treatment, but may have that precipice shattered by allowing men to compete as women. I always believe in letting folks choose their own course as long as it doesn't hurt others -- But I do not see why a transgender person needs to compete in sports as another gender in order to develop emotionally. But I do see the harm it is doing to women who are not transgender.