Hello All, question, is it typical for tickets to be on sale on Stub Hub before you can get direct with BC? I see Clemson tickets are on sale there, yet not from BC. Thanks!

Staff member
They are there, but they are expensive 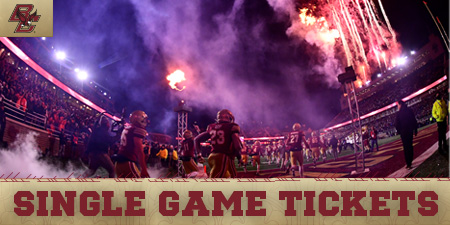 Thank you AJ. I appreciate you sharing the link.
C

I know someone who buys and sells tickets for a living. He makes high 6 figures. The ticket sales folks do not know how to stop him. One way is to arrange with folks who sell tickets for packages of tickets for resale on legal sites such as Stub Hub. These sites take on the risk if the they do not resell the tickets. BC and the ACC must have such an agreement with Stub Hub. As to my friend, he believes eventually the powers to be will figure out a way to stop him from reselling his tickets -- but he does take on the same risk -- but prides himself in knowing the market for resales -- he told me that he makes most of his money in concert tickets -- he had several computers and folks who work for him that purchase tickets as soon as they are offered for sale and then immediately resell them when the event sells out.

I would never buy from one of these sites if I could buy from BC -- too much risk.

Rutgers might have 5K+ for the opener since it’s before Labor Day? NJ drive is close.

BC tickets will always be cheap and plentiful.

This shithole stadium, parking, and now much higher travel costs to Boston and those driving or visiting fans who want to tailgate always have the parking, traffic and time limits?

Then again, Bidenomics might limit disposable income in next few years so without a exciting winning team or great matchups, attendance may slide off?

There ya go, a new built in declining attendance excuse for the 1950’s design stadium

You describe the bigger problem -- nobody cares if they ever play BC and there is no incentive to visit the stadium and enjoy all the fantastic things that Boston offers. The school continues to believe it can use its students who are getting financial aid to make phone calls to either raise money or attend events at the school. Moreover, we have more than enough alumni who live close enough to the school to attend home games without room and board costs and they do not come.

I wonder if we went out to all the other boards on the ACC how many times we would be mention in the top three or if anyone would pick us as their top one. BC and Syracuse have been lower tier teams so long that they may be forced to be with each other -- but there has never been a rivalry -- we don't mark the Syracuse game on our calendar and wait for big day -- we don't fight depression if we lose to Syracuse. Both schools suffer from the same lethargy to college sports with their administration -- in fact, it is more understandable for BC to behave this way than a school that produced Jim Brown, Ernie Davis, Donovan McNabb, Larry Zonka, and Floyd Little and won it all around 1960, plus had some great teams in the eighties and nineties than a school who lucked into Doug Flutie and Matt Ryan. When BC upset Syracuse back in the mid-sixties, the folks from Syracuse went into mourning -- not because they hated BC -- but because Syracuse had sunk so low as to lose to a team they considered mediocre. And remember that last play, when our great end went up for the ball, two Syracuse defenders collided with each other and we trotted into the end zone with he winning score.

Maybe if we were in the Big10, the folks from Rutgers or even MD would care -- certainly the folks from UMASS or UCONN would care -- but we are considered annoying to most of the ACC (most of whom want us gone anyway) and a game with BC is a lose/lose -- most other ACC teams are expected to beat BC and BC has sufficient talent to upset them from time to time. And no matter how much we brag about a first round draft choice, we better respond this year or the new OLINE U will become NC State.

What is most frustrating is most folks do not understand that the landscape of college football has changed and there is little anyone can do about it. If you want play Power Five football, then NIL is here to stay -- we lost Kraft -- not because he was the best AD ever -- we still do know -- but he did have NIL plan for BC and he was implementing it -- AD's like that are going get snatched up because that is the talent needed to remain competitive. However, many times I read posts where folks express what should be done -- and most of the ideas limit NIL -- the SCOTUS put zero limits on NIL. We don't have to play on the field, we could get off of it -- I hope not -- but if we don't have solid plan -- we will be forced to take our football and go home and either play club football or give it up entirely.
That's the landscape. The person chosen to be the next AD will disclose a lot about where BC's is going.

Moreover, we have more than enough alumni who live close enough to the school to attend home games without room and board costs and they do not come.

When TCU was in the SWC the Arkansas people in Motor homes showed up on Wednesday.

Tons of rival alumni showed up along with of course the TCU faithful.

Decades of BC alums were treated shabbily in tailgating space & time & rules, Gestapo police and then a shithole cold hard bench with lousy concessions and toilets a mile down.

Add in the 11 years of Dante’s Last Rectum of Hell football diarrhea with SpazDaz, and most pick a good game once a year and watch most on TV.

Then the tailgaters pissed off for lack of time show up in quarter 2.

We know the solution. Sadly it shall never ever come to pass.

4/5 Star Texas player who grew up in the North and was relocated with parents job gets a scholarship offer from BC and the same from Texas, but with a leased SUV and $250K minimum a year. Offensive linemen get $50K now.

But Fr. Leahy will be 75 next year -- so maybe he is ready to step down. Most priests do step down from complex ministries like running a major university at that age and move to a more contemplative stage as they prepare to enter into eternal life -- but others decide not to. Perhaps, our President is ready to move on -- or he may not.
You must log in or register to reply here.
Share:
Facebook Twitter Reddit Pinterest Tumblr WhatsApp Email Share Link
Visit the Sports Illustrated Boston College site
Top