"Last week, the NCAA announced revised NIL guidelines meant to discourage schools and boosters from using deals as recruiting inducements — and said some programs could be subject to investigation.
But while the governing body attempts to exercise more regulation over NIL, another group is doing the exact opposite: state legislatures.
Since 2019, 24 states have passed NIL laws, according to a Bloomberg tally.
Originally, the laws were put in place to ensure that athletes could participate in NIL even if the NCAA didn’t change its own policy. Now it’s clear that some laws prohibit moves that could help schools with recruiting — like the ability for athletic department staff to arrange deals for athletes.
Many states are now repealing or amending their laws to help their local schools:
• In February, Alabama became the first state to fully repeal its law.
• An amendment to Missouri’s law allowing schools to arrange deals was passed last week and awaits the governor’s signature.
• Mississippi passed a similar amendment.
• Legislators in Florida are considering loosening their restrictions, as well.
Enforcement Conundrum
As the Bloomberg article pointed out, it’s unclear how states plan to police deals that violate their own laws. So far, none have publicly punished schools or athletes for NIL activity.
It may not behoove them to reprimand their own local schools and athletes, either. That alone could make a state look like a less-than-friendly destination for an athlete seeking deals."
C

I am hoping BC is using the same search firm it used to find Kraft as AD in the past (CSA in Raleigh) as they appear to be very aware of the tools needed to guide athletic programs in this quickly changing world of NIL and going super conferences.
C

Here is an article about him on the Miami Boards 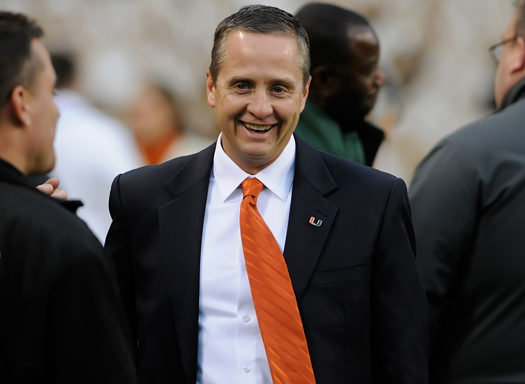 Blake James; An AD Hiding In Plain Sight - ItsAUThing.com — Formerly allCanesBlog.com — It's All About 'The U'!

The past few years have been tumultuous on many levels for the Miami Hurricanes. On the field losses. Coaching turnover. Scandal. Player suspensions. A
itsauthing.com
C

Not a whole lot being said about Blake James hire. Interesting things to consider: He did get fired from Miami -- but the school was less interested in things like the 94% grad rate and scholastics than the football record and they did go through the whole ponzi scandal -- he appears to be a guy who is loyal and will stay with a program -- and we know how important that is to BC right now after losing two AD's in 5 years despite having penalties for leaving. He was active in NIL at the U and has successfully raised money to improve facilities at the U -- that certainly will help at BC -- but he lost his high donor support because of his hires in football and baseball -- as folks considering him wrong in not conducting nationwide searches. He will have to make some tough decisions at BC in baseball and women's basketball. He understands the NE having worked at both Maine and Providence. Anybody out there have a better feel for how he should perform at BC?

I am hoping his experience at the U with NIL and his success in funding raising to improve facilities could result in better recruiting and maybe even a new or improved stadium -- but he was just fired, so it hard to figure this hire out.
C

So, let's give the Lacrosse players scholarships and hire Charlotte as an assistant coach.
Let's ask the law school to write law review articles on the new laws that are here or coming in NIL
Let's get AJ installed as the new trusted media person for our admin
Let's include NIL in a our revised Master Plan